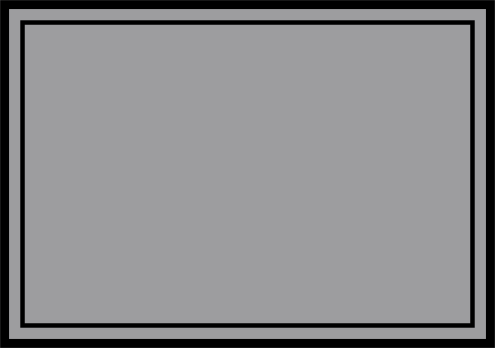 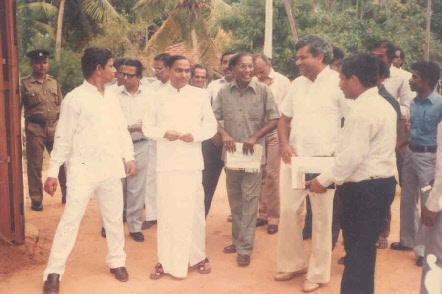 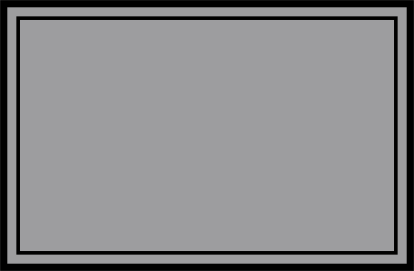 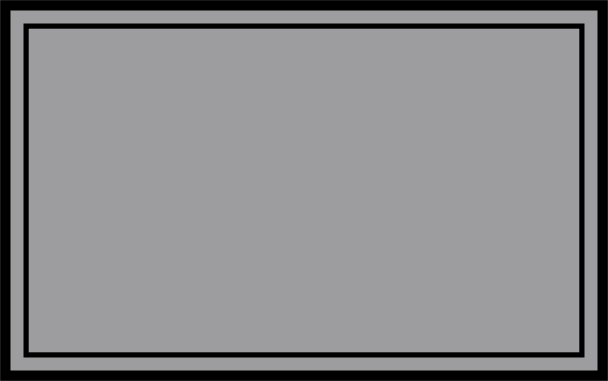 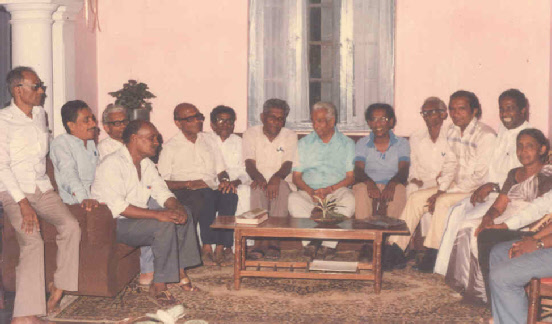 (The writer is a well known Poet, Lyricist, SLBC artist and Radio Media Personality who held the post of Assistant Secretary of ATHAKASA for 16 years)
On April 12th 1935, a group of young men P. B. Alwis Perera, R. Wilson Hegoda, Arthur M. de Alwis, Peter Perera, T. G. W. de Silva, A. P. Gunaratne and K. Lionel Perera sat under a tree at the Victoria Park (Now Viharamaha Devi Park) in Colombo for their usual evening chat. On this day they discussed the need to promote in Colombo an era of Sinhala poetry and decided to form an organisation and called it Colombo Kavi Samajaya (Colombo Poetry Association). A few weeks later at the first meeting held at Dematagoda attended by a large number of young poets of the day, a decision was taken to rename the new organisation as Aganuwara Tharuna Kavi Samajaya (Colombo Young Poets' Association) in order to being all poets in the country under one umbrella. The acronym ATHAKASA was used for the Association.

The first office bearers were Ven. Mahinda of Tibet as Patron, P. B. Alwis Perera as President, Kapila E. Seneviratne as Secretary and J. C. Jayatilleke as Treasurer. One of the prime objectives of the ATHAKASA was to nurture the art of Sinhalese poetry of the Colombo School. Which denoted a type of Sinhala poetry created with the amalgamation of the Sinhalese poetry of the Matara and Kandy periods. The language used by the Colombo School was simple and flowery and most importantly metrical and rythmetical. It vastly differed from the poetic art of the old schools mainly due to the simplicity of the language used.

In addition ATHAKASA poets demonstrated an unprecedented talent to recite impromptu verse (HITIVANA KAVI) on any given subject, using colloquial language. To propagate this art these poets travelled throughout the island, accepting invitations to temple ceremonies, New Year festivals, meetings of the then Rural Development Societies etc and demonstrated the art to large audiences. Soon the art became very popular among the rural folk and ATHAKASA earned its place as a household name.

However, in 1950s, a new breed known as the Peradeniya School of Poets led by Siri Goonesinghe and Gunadasa Amarasekere, confronted ATHAKASA by popularising their art, which resulted in debates and critical arguments among the two Schools. But this did not harm the position of both the schools and service up to date as two separate groups. When the struggle for National freedom gathered momentum, Colombo poets joined hands with the freedom fighters to inspire the people. Sinhalese poems written and recited by the late Tibetan monk Ven. S. Mahinda are well known and highlighted even today. Sinhalese weekly publications like Sarasavi Sandaresa, Sinhala Balaya, Sinhala Jatiya, Peramuna, and Silumina of the Lake House Group, opened their pages to ATHAKASA poets to enable them to inspire and awaken the people.

After independence, ATHAKASA voiced to raise the Sinhalese language to official status and demanded governments from time to time to make Sinhala poetry a school subject, to confer honourary titles on outstanding poets, to issue postal stamps in commemoration of poets and men of literature and to work for the well being of Sinhalese poets and artistes.

Mr. Chitrananda Abeysekera are also in the picture. 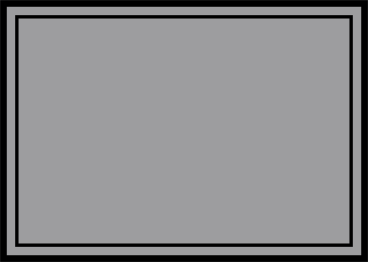 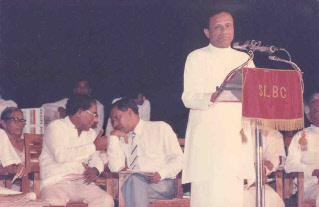 When the late Mr. Ranasinghe Premadasa became the Prime Minister, he helped ATHAKASA in numerous ways because he himself was a gifted poet who held close connections with the ATHAKASA. The late Mr. Weerasinghe Mallimarachchi, as District Minister for Colombo too assisted it and on June 25, 1985 ATHAKASA held 50th anniversary at the Embilipitiya Gam Udawa grounds presided over by the Prime Minister and attended by the Chinese Poet Mr. Lu Li.

On this day, the then Hon. Finance Minister, Mr. Ronnie de Mel, declared ATHAKASA a public charity reading the relevant Parliament Act and former Minister of Posts Mr. D. B. Wijetunga issued a special stamp to commemorate the occasion. It should be stated that all these were achieved when the late Mr. Chitrananda Abeysekera, former Director of Sinhala Services of SLBC, was the President of ATHAKASA for 12 years (1980 – 1992). Sesiri Wijesekera succeeded him and doing his best. Later, another five prominent poets Pundit M. Premadasa, Walgama Somathileke, Mervyn Senaratne, Katuwalamulle Jinadasa and Srimathie Senaratne conferred the Kivipathi title by the Honorable Cultural Affairs Minister Professor Karunasena Kodituwakku.
At the Embilipitiya celebrations, so enraptured with the colourful proceedings, Prime Minister/President Ranasinghe Premadasa sprang from his seat and recited the following verse impromptu thrilling the audience by his poetical talents. "No one can claim that he or she is a poet just because he or she had composed four lines of words. A poet should necessarily have a fertile imagination, which could come only by having good habits and human qualities, only such a person could be a good poet." 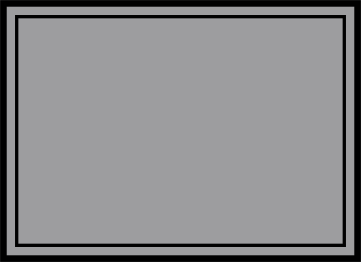 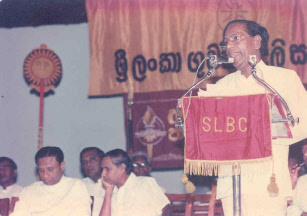 Bank Account for ATHAKASA:
ATHAKASA didn’t have a bank account, and he managed open a bank account with the money donated by Hon. Minister Mr. Weerasinghe Mallimarachchi.

District Branches of ATHAKASA:
While gaining popularity, he initiated to open district level ATHAKASA branches around the country. The first branch was inaugurated in Matale under the patronage of Hon. Minister Mr. P. B. Kaviratne. Followed by Kurunegala, Galle, Hambanthota, Thissamaharamaya, Dambadeniya, Rathnapura and Embiliptiya etc.

“Kavi Suwanda”:
In 1984, Chitrananda started a monthly newspaper in order to help young poets. It was a very well presented platform for young and experience poets alike. 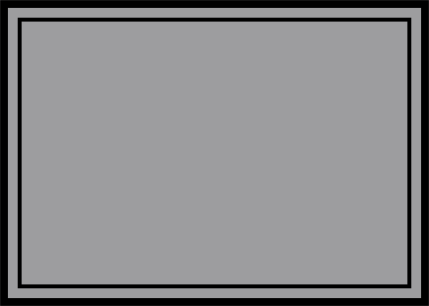 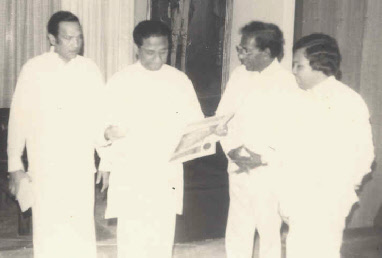 ATHAKASA – A Charitable Organization:
ATHAKASA became a charitable organization under Chitrananda’s leadership as the President.

Home for ATHAKASA:
Hon. Prime-minister Mr. R. Premadasa provided a upstairs apartment for ATHAKASA to operate as an office.

“Kokila Hatana”:
Chitrananda gave life to the Kokila Hatana Poetry Competition which was earlier initiated by a founder member of ATHAKASA Mr. Wilson Hegoda. Chitrananda gave a new vision to this programme and held every year as national poetry competition. The winners were awarded exciting gifts.

Foreign Cultural Exchange Programmes for Poets:
This new cultural exchange programme was brainchild of Chitrananda. With the State patronage Chitrananda manage to send many Sinhala Poets to China. The first poetry delegation was sent to China under the leader-ship of Hon. Weerasinghe Mallimarachchi and followed by the delegation headed by Hon. P. B. Kaviratne. Hon. H. B. Wanninayake headed the third delegation. There were total of 12 poets had the opportunity to explore China so far. 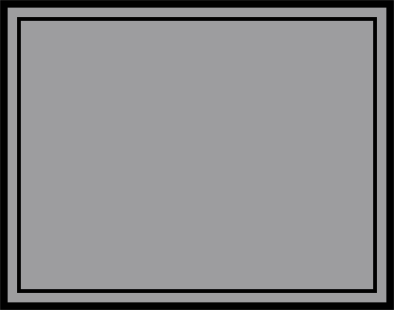 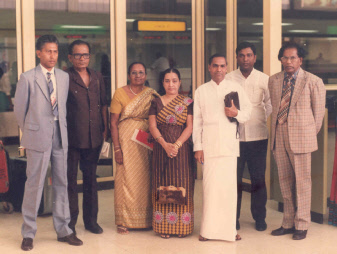 Commemorative Postal Stamps for Poets:
Four Commemorative Postal Stamps were issued to honour four of the great poets of yesteryear. The late poets were Mr. G. H. Perera, Mr. Sagara Palansuriya, Mr. Wimalaratne Kumaragama and P. B. Alwis Perera.
“Kavi Madu”:
Chitrananda let the tradition flows. He started “Hitivana Kavi Madu” in different cities to show the beauty of Sinhala Poetry to masses. Almost every of these events were a box office hit. The people even stayed out side the theatre halls to listen to impromptu verse poetry (Hitivana Kavi).

Sinhala Poetry & Sinhala Literature to School Syllabus – A Campaign:
For last 30 years, ATHAKASA launch a vigorous campaign to add Sinhala Poetry as a separate subject to the school syllabus. To give more weight to this, ATHAKASA widen the spectrum by adding Sinhala Literature also to their campaign. ATHAKASA President, Chitrananda Abeysekera officially presented this to the Hon. Prime-minister at the 51st anniversary celebration event. Few months later this became a reality filling a huge gap in Sri Lanka education system.

ATHAKASA 50th Anniversary:
ATHAKASA Golden Jubilee was celebrated under the Presidency of Chitrananda Abeysekera on the 25th of June 1985 at the Embiliptiya Gam Udawa Grounds. Hon. Prime-minister Mr. R Premadasa was the Chief Guest at this occasion. A commemorative postal stamp was issued on this day. A Great Poet of China, Mr. Lu Lie was specially brought down to Sri Lanka to grace this occasion.

Get the State Recognition for ATHAKASA:
Chitrananda manage to get the attention from the Sri Lanka Government for ATHAKASA and Sinhala Poetry. And this was possible due to the fact that the many poets were being holding different positions in the Government. H. E. the President, Hon. R. Premadasa was a poet and also a founder member of ATHAKASA. Hon. Ministers and Members of Parliament, Mr. Weerasinghe Mallimarachchi, Mr. W. J. M. Lokubandara, P. B. Kaviratne, and Mr. H. B. Wanninayake etc. were the prominent supporters. Also his popularity as a broadcaster would help him to get the attention from many others.
Chitrananda's stewardship as President of the Aganuwara Tharuna Kavi Samajaya has taken the Sinhala verse and the Sinhala poet shine in foreign sands. Yugoslavs were enthralled by the Sinhala Verse when he broke into impromptu verse in Belgrade (Please find the complete speech in the “Related Work” Tab). Heading the Sinhala poets, Chitrananda provided a treat of Sinhala Kavi to Chinese people in Beijing. 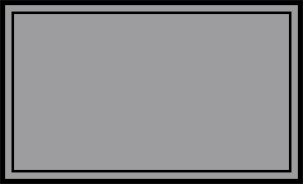 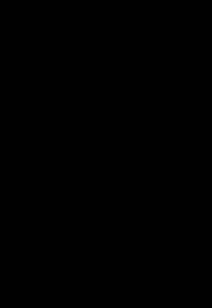 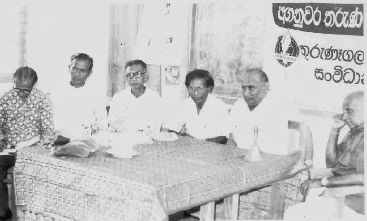 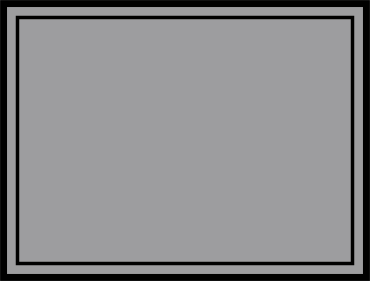 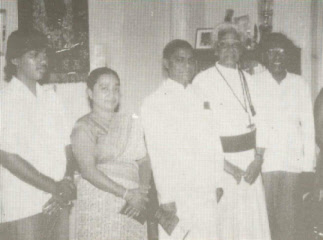 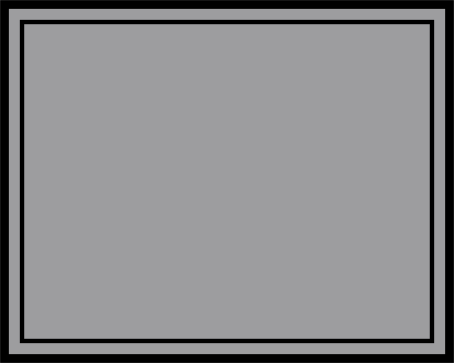 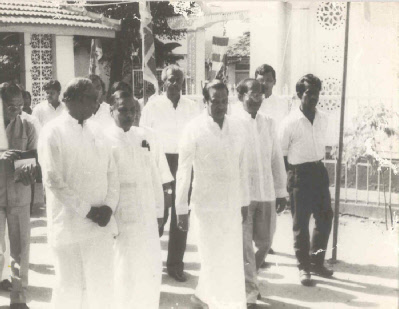 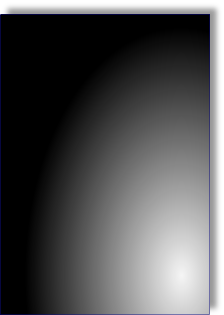 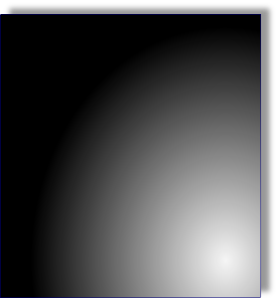 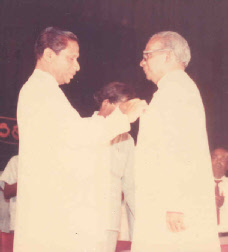 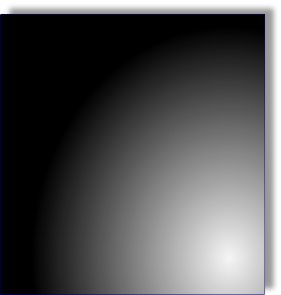 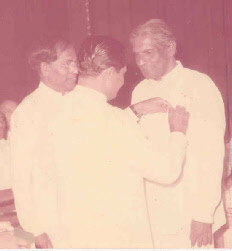 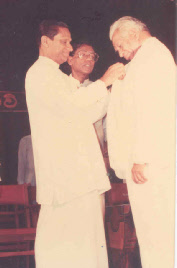 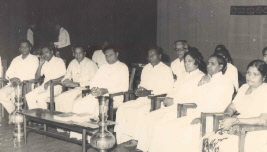